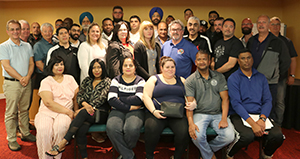 Ottawa, ON – Airport Security Screeners from British Columbia and Toronto gathered in Ottawa to lobby for changes to the Canadian Air Transport Security Authority (CATSA) legislation. Across Canada, Screening Officers are subject to an unfair Dispute Resolution Process that is arbitrary and infringes on the most basic of principles in labour relations – the right to appeal and the right of unionized workers to union representation.

“If all Canadians have the right to a fair and timely Dispute Resolution Process, I fail to see why Canadian Screening Officers should be any different,” said Fred Hospes, President and Directing General Chair of IAM Transportation District 140 said.

The many testimonials the IAM has heard from Screening Officers obliged us to move quickly to make sure our voices are heard by Members of Parliament before the next election. “We know our voice must be heard in order that Screening Offices get the fair and timely dispute resolution process they need and deserve,” explained IAM Canadian General Vice President Stan Pickthall. “It’s what most Canadians have, it’s time Screeners did too.”