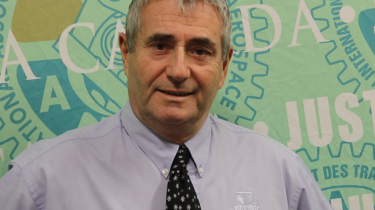 October 2, 2020 – “The Federal Government should absolutely support Canada’s airline and air transportation industry!” This was the unequivocal statement of Stan Pickthall, Canadian General Vice President of the Machinists Union (IAM). “This is a position we have taken throughout the pandemic, and one that we have published in two releases on our website.”

Pickthall applauds the recent addition of other Airline Unions who are now taking strong positions on this campaign. “Most of the major Unions representing workers in air transportation are now backing the call for assistance to be provided to the airlines and air transportation companies, who have been devastated beyond belief by this pandemic. Together we are stronger!”

“Air Canada alone lost in excess of $1 Billion in the second quarter of 2020, and the news will soon come out for Q3 – which looks like it will be much the same. Without much-needed Federal assistance for this industry, we could soon be facing bankruptcies by even the major players.”

However, the IAM says that Government assistance must provide assurances to protect workers in Canada’s air transportation industry. Specifically, it must be conditional upon an employer plan and commitment to make the protection and creation of jobs a condition of the loan.  “Any Federal funds to airlines must not be used for executive compensation and bonuses,” stated Pickthall. “We have played that movie before, and we do not support bailouts for executives.”

Air Canada alone has laid off in excess of 20,000 employees, many of whom are IAM Union members. The IAM has seen furloughs of almost half its membership at Air Canada over recent months after the Company discontinued the federal wage subsidy (CEWS) program among its unionized employees.

“Corporations must have a plan that protects the jobs and salaries of workers; this plan must have as its goal the return to work of their entire workforce.” Pickthall concluded.

The IAM is the largest Union representing almost 20,000 workers at Airlines and Air Transportation across the country. The IAM has posted numerous and regular communications to its membership over the past six months – many of which are in response to the COVID Pandemic and the economic impacts on workers.